Frankly, when we arrived in Milan we weren’t impressed. We arrived at Central Station from Milan Malpensa airport (via train) and it was filthy. Signs were misleading or there weren’t enough of them to follow, local and military police kept a hawk-eye on everyone passing through and there were more panhandlers in one location than I believe I’ve ever seen. Reading about Italy and speaking to friends who have traveled in Italy we were on guard for pick-pocket geniuses so that only added to our unease. So I’ll just admit now that we were not excited.

Thankfully our host allowed us to drop off our bags early, so after riding a tram to the closest stop we were able to pop in, meet our host and drop bags. She shared a great book with us to help with sight seeing and we were off! Our first day was a long day due to traveling at 4am in the morning and lack of sleep the night before. It was after 10am before we were able to sit down and eat something and grab a cappuccino. Caffeine helped; it at least kicked us back into a near normal pace! 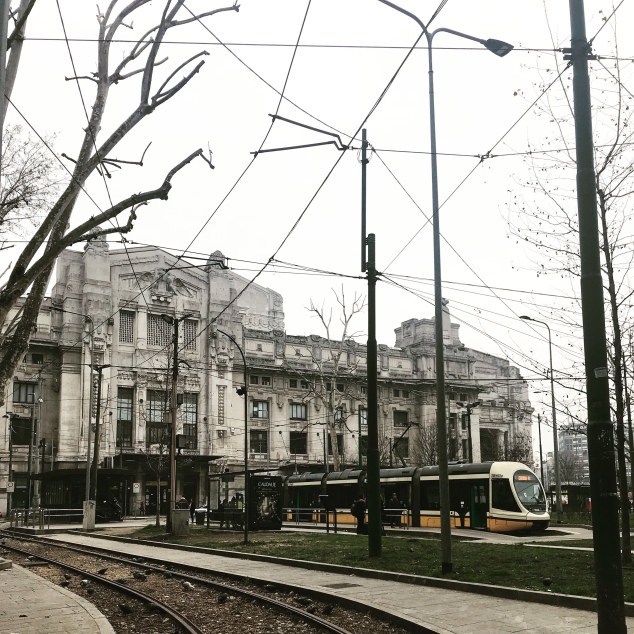 Let’s talk about cappuccino’s… umm… Italy, you are the BEST! No matter what anyone tells you, once you’ve drank your way through Italy via cappuccinos and lattes any other will be subpar. Sadly, it’s just a fact you have to accept. I know, because now we’re in Switzerland and yea… does not compare! (Plus they’re 3xs more expensive here in Switzerland). When you get tired of sight seeing in Italy you just pop into a cafe and order coffee (mornings are for cappuccinos, afternoon for espresso or lattes) and sit. Restaurants in Italy are slow and laid back, you don’t rush in and rush out— there is no rushing. And you know what? That’s ok, it’s nice to kickback and relax a bit without feeling like you have to scarf everything down and run out to give them a table back. 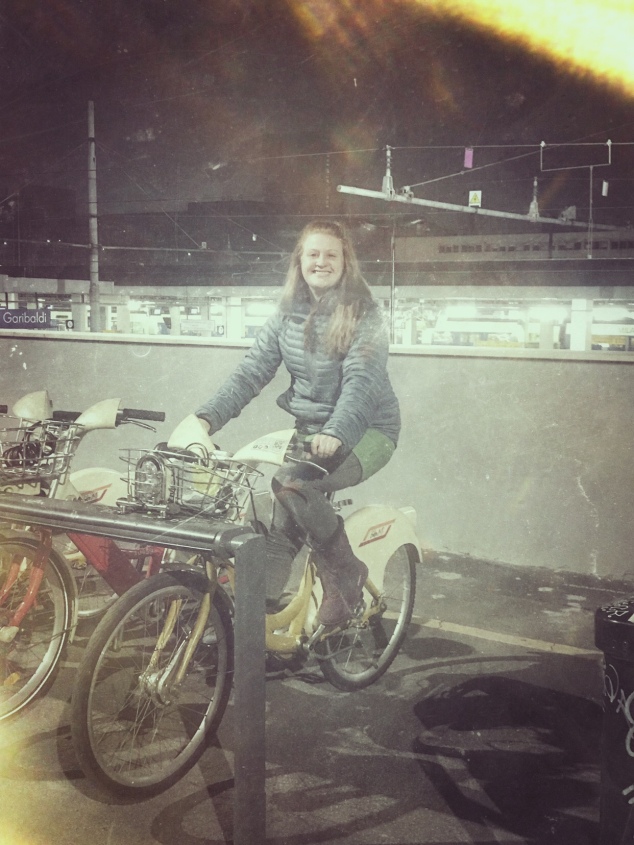 After spending a night at our host home we felt a little more refreshed and ready to explore Italy further. We decided to take it slow to give ourselves more recovery time. Traveling is amazing and exhausting all at the same time. I wouldn’t trade any of our experiences up to this point, but sometimes you just need to rest. We didn’t leave our host home until after lunch due to enjoying a lovely morning relaxing and reading. Sundays in Italy are even more relaxed than other days so we embraced the slow pace and explored. The buildings are beautiful and they draw you in with every turn. Balconies overflowing with flowers and greenery, soccer balls tucked in corners with other children’s toys. Some flats had their windows open and you could listen to their music wafting through or Italian chatter as friends toasted each other and enjoyed their time together. Families were out and about walking to restaurants or parks, kids were on their bikes following parents and often playing chase with each other. It was heart warming to see all of the families spending time together. 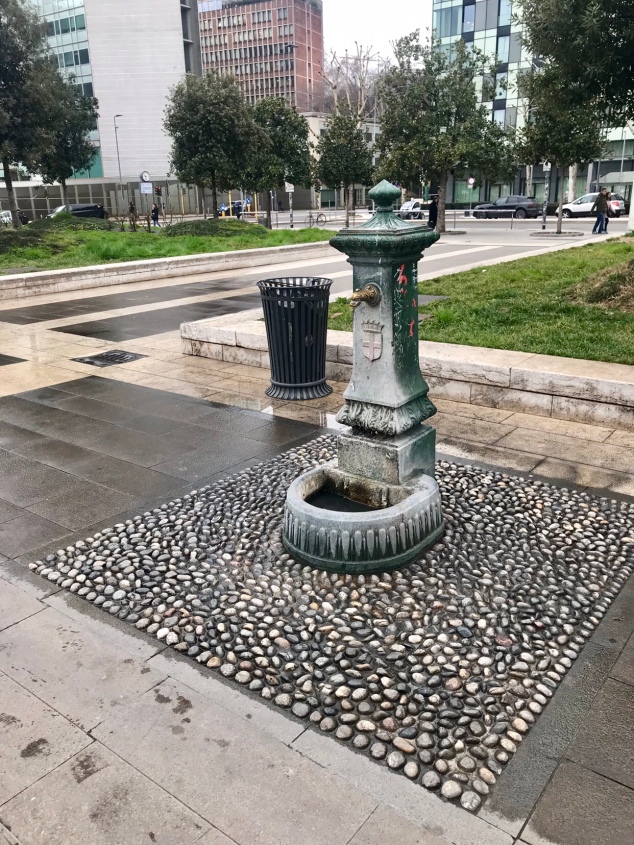 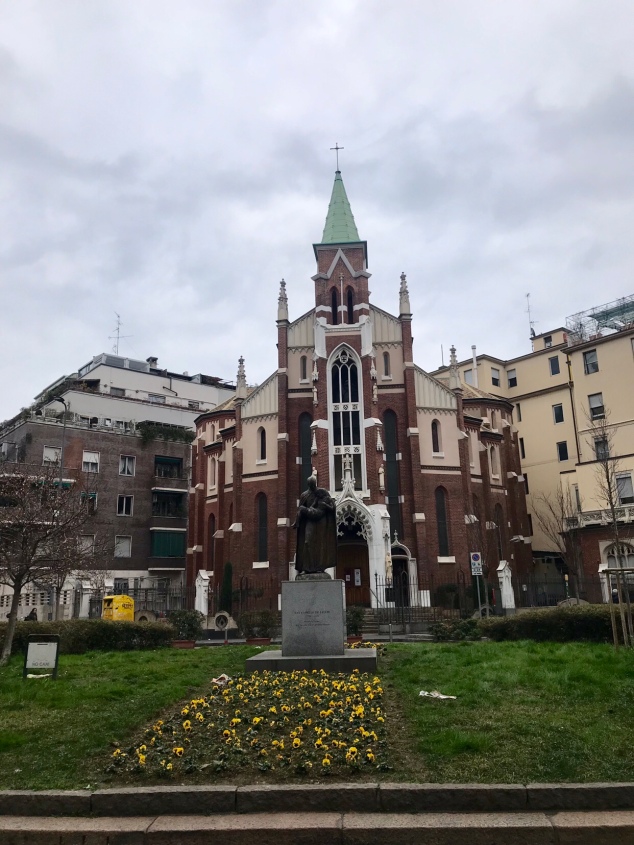 We forgot about afternoon riposo (or rest) so when we decided it was time to find food all of the restaurants were closed until 6:30/7pm (it was around 3:30pm when we felt like eating). As we walked around hoping for an open restaurant we ran into McDonalds… it was open, I was starving and getting “hangry” so we went in. They had multiple ordering kiosk which made it super easy to order and pay for your food (they bring it to your table). The menu is very different than the U.S. so we enjoyed trying it out! Now we know, when in a pinch, McDonalds! They even have a decent cappuccino, although I’d recommend getting them from cafe’s as it’s similar in price and much tastier.

Monday we rented a car, Fiat Panda, so we could drive to Lake Como. I won’t even go into the details of how frustrating it is to find places in Italy… Italy, if I had one request, it would be to take some tips from other countries Central Stations. Lol Let’s talk about getting out of Italy! Driving in Italy is intense, maddening and hilarious. Not only do you have to contend with drivers, but you have motorcycles/scooters that pass you in all directions (cutting across the wrong lanes, in and out of bike lanes, across sidewalks) and then you also have to watch for pedestrians that have the right-of-way at most intersections (except at large ones where they have traffic lights controlling all traffic). Being in the heart of Milan we knew it would be an adventure to get out. We’ve found that GoogleMaps frequently let us down and per online suggestions maybe try Waze next time. Besides being a typical downtown with a gazillion one way streets, it is also full of roundabouts. Marty drove and I helped with navigation. We quickly learned that if you don’t drive super aggressively you’ll either probably die or never get where you’re going. The little Fiat didn’t have a ton of pick-up so Marty would downshift frequently to keep up with traffic. There were little jolts here and there, but it was such a fun ride!

When we arrived in Como GoogleMaps was taking us to the lake… this is where it became incredibly amusing. There is an area surrounded by ancient walls in which Como Cathedral is located. Google decided to take us directly to the lake so next thing I know we’re inside the walls on tiny cobble stone, one-way streets that make the Fiat Panda feel huge while trying to avoid walking pedestrians and follow the blue arrows guiding us down open streets. We couldn’t help but laugh, we frequently got stuck because roads were closed or because there were delivery/work trucks parked in the middle of the one-way streets. After a bit of driving around following blue arrows we finally saw the primary road outside the walls and made a mad dash to get out. Whew… what an adventure! Eventually we found parking and then walked our way through the town within the walls to Lake Como. Lake Como, by the way, is a glacier lake and absolutely gorgeous! Glacier lakes have the best color and this one did not disappoint! 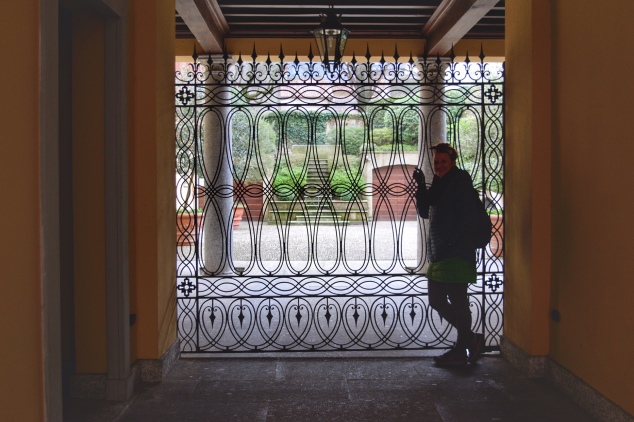 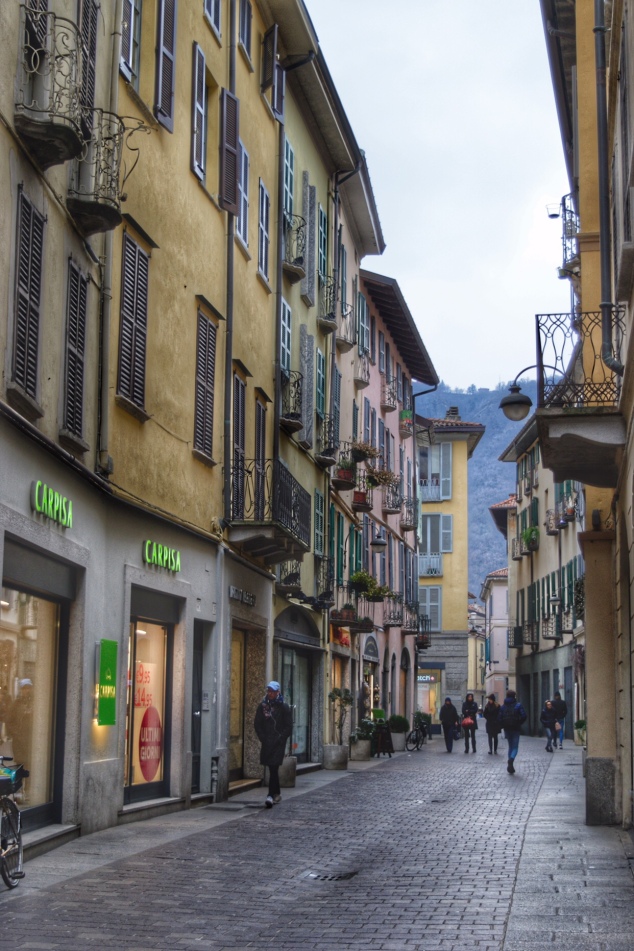 Before leaving Como we headed to the funicular so we could ride above the city and gain a better view of Lake Como. This is the second funicular we’ve ridden since arriving in Europe and it’s the largest I’ve seen. It actually had 4 or 5 connected platforms with seating and the load it could carry was quite large. There were 2 funiculars running at this station, one going up and the other going down at the same time. The views were pretty phenomenal and after arriving at the top I dragged Marty up another 2km to the lighthouse. It was quite the climb and at moments I regretted it, but we finally made it! There were several other tourist traipsing up and down, it felt like we all made a little pact to survive this climb no matter what! 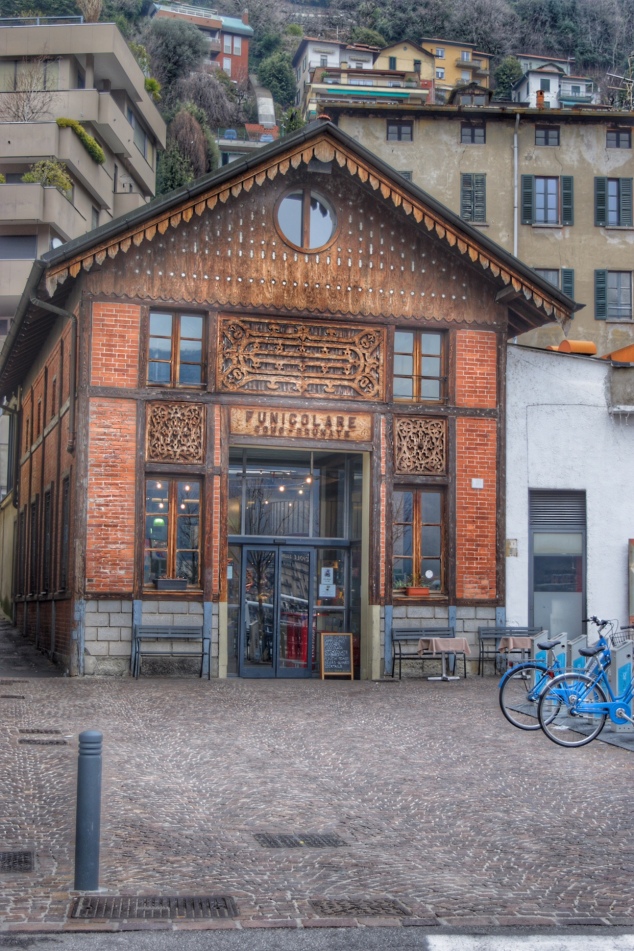 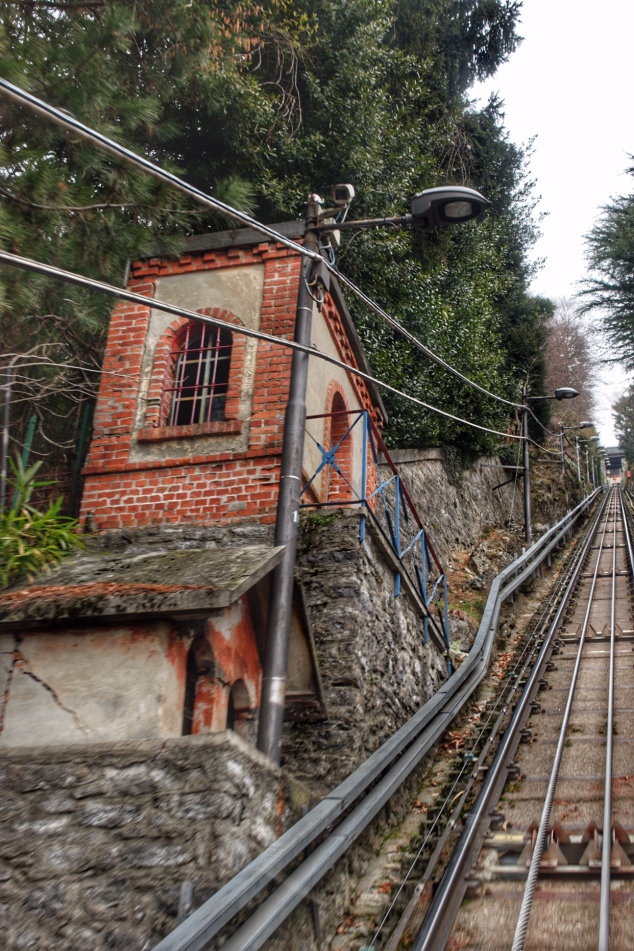 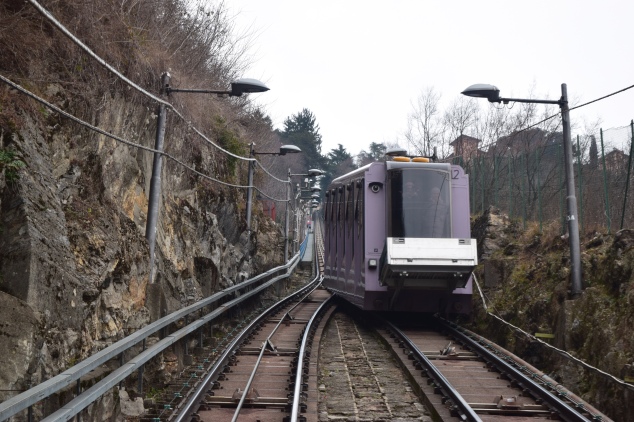 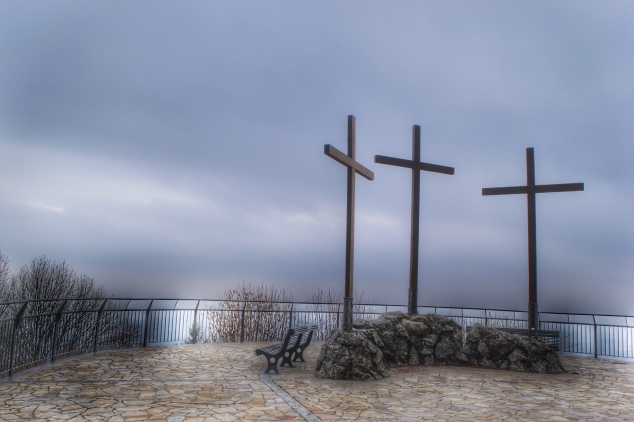 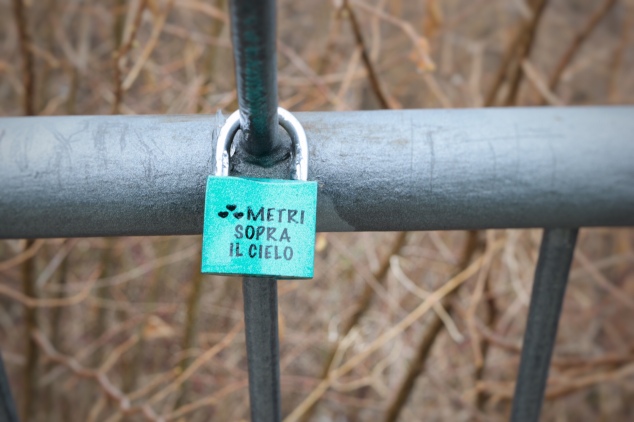 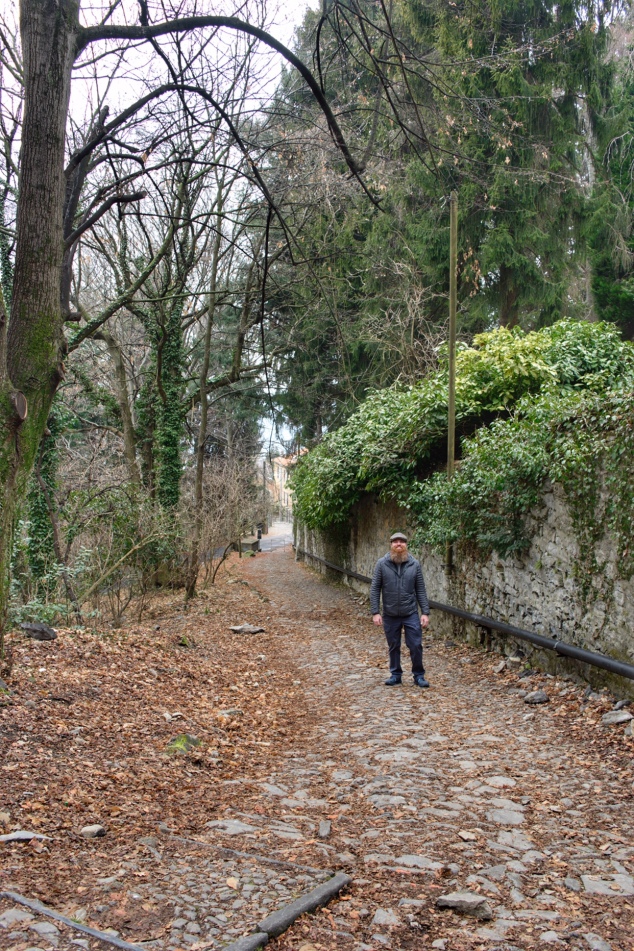 Finally it was time to return our little Fiat, Marty let drive it back into town and although slightly scary it was a blast. I think Marty might have gained a few more gray hairs from my driving, but hey, no accidents and we made it back in a timely manner! Hahaha

After doing some evening laundry at the laundromat we were packed up and ready to head to Switzerland by train the next day. Overall Milan was a lot of fun, maybe a few too many people for us, but we found beauty within and appreciate the opportunity to experience a different culture.