While traveling in Germany we decided to dip into Austria… mostly because we could. We were going to visit the Neuschwanstein Castle and with it being along the boarder it just made sense. We booked a night in Innsbruck, Austria and headed south!

During this time we still had the BMW 5 series so Marty was happily driving down the Autobahn speeding as fast as he was able in areas and enjoying the open road… I had motion sickness patch on and often closed my eyes. I’m not sure why, but it seems each year I become more and more susceptible to motion sickness, and it’s beginning to show itself in odd places. Large boats such as ferries or sight seeing boats are triggers, flying bothers me a bit but GinGins get me through, the cruise ship between Finland and Sweden was a bit of a trigger, and now more frequently car rides… even in the front seat! Bleh. At least we left home with 6 patches and they work brilliantly!

Previously noted, when we arrived at the Neuschwanstein Castle it was after hours so we weren’t able to take a tour. After enjoying the fresh snow and evening sunset we continued traveling through the mountains into Austria. Our host in Austria was a young college kid named Simon; we had a private room at his place for the night and access to the house. He was home when we arrived and cheerfully showed us around the house ensuring we took off our shoes (as everyone does in Europe), asking us to turn off lights when we left a room (as everyone does in Europe) and then proceeded to ask us to take no longer than 7 minutes in the shower (this isn’t usual). It was kind of fun watching him bounce around the house showing us everything and then chuckling at all of the notes posted throughout the house reiterating what he was telling us. Seriously… 3 notes in the bathroom, notes all over the kitchen… you get the picture. 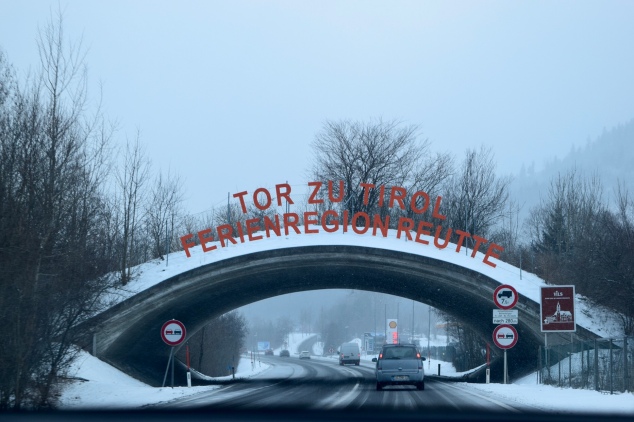 After a good nights sleep, morning tea and a Berliner we headed out to explore Innsbruck. The town is in the middle of beautiful snow covered alps and every turn was absolutely gorgeous. They hosted Winter Olympics in 1976 and still had the Olympic Rings throughout the town. Innsbruck is known for amazing skiing and the town is clearly set up for it with many lifts and buses continually taking people up to the snow. It was fun traveling through the ski town with many people toting around their skis and boards as they walked down the street. It sort of reminds you of Salt Lake City in Utah, but a bit smaller bowl with the mountains closer on all sides.

Since we missed touring Neuschwanstein, we decided to check out Ambras Castle, a medieval fortress turned Renaissance palace, home of Archduke Ferdinand. We snagged free parking (by fluke that the machine was out of order) and we headed in to explore! It may not be the most extravagant castle at first glance, but it was full of history… and peacocks. The only downfall to this castle was that it was cold outside and cold inside. In the lower castle, we went through exhibits showing medieval armor and history of war, but we kept catching a chill! The buildings were not heated and the workers staffing the halls were all as bundled up as we were. It’s a bit amusing… until you need the toilet. 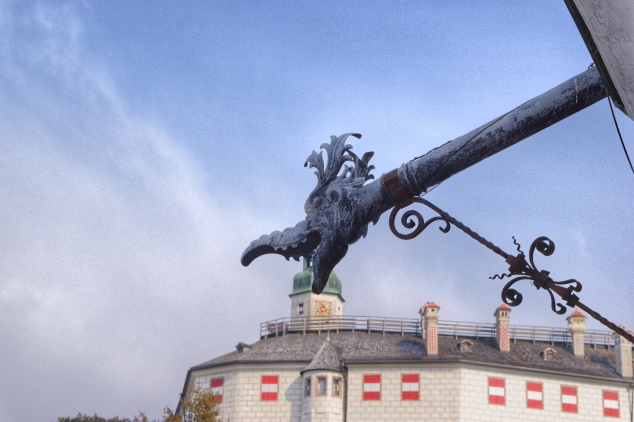 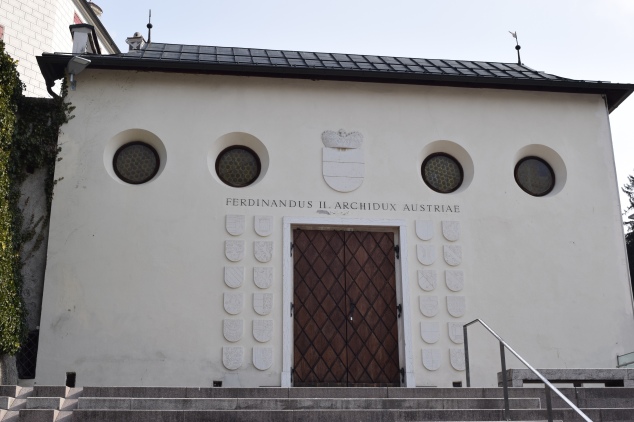 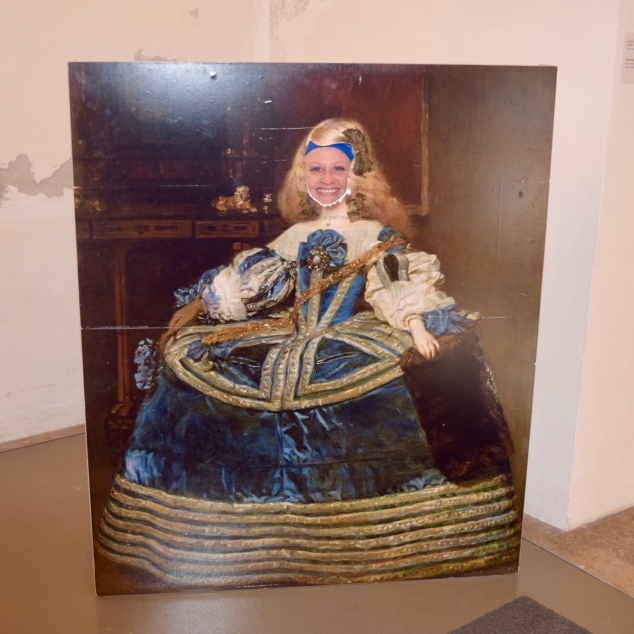 Although the outside of the castle was more simple than others, the inside had beautiful craftsmanship. After learning about the history of armor, medieval amusement of jousting and how it evolved, we followed the tour into what is the oldest museum in the world. The collection put together is quite amazing and also humorous when you begin looking at the oddities collected by the wealthy. Some items such as carved coral, carved ivory, intricate wood carvings, all with insanely tiny, clear details, etched glass, and amazing locks with single keys by a specific locksmith it was funny to look at a painting of the largest hog “in the world” on canvas that the king loved, or ridiculously tall platform female shoes that they technically couldn’t walk in and required an assistant to guide them when they walked… but continued to wear the shoes because it represented their level of wealth. Oh how times have changed… and yes, I am aware we have just as many oddities and amusing bits to poke at with our current wealthy individuals, but the past displays of wealth always tickles me funny.

In the Upper Castle we loved looking at the Spanish Hall with its gorgeous woodwork on the huge doors, the incredibly detailed inlaid woodwork they request you not to touch (which only makes you want to touch them), decorative stone floors, gorgeous ceilings laid out with warm, dark wood and paintings, on the wall you view paintings of Tyrolean rulers (27 life-size portraits) as well as artful detail, tall windows along one side topped with large round windows that had paintings of different scenic views across from them on the opposite wall. It was a lovely room that you could imagine full of life. The craftsmanship put into the decor is unlike anything you see now days; the intricate detail, use of natural products and built to last a lifetime. We had a great time admiring the castle, learning a bit more history and gawking like all of the tourist. 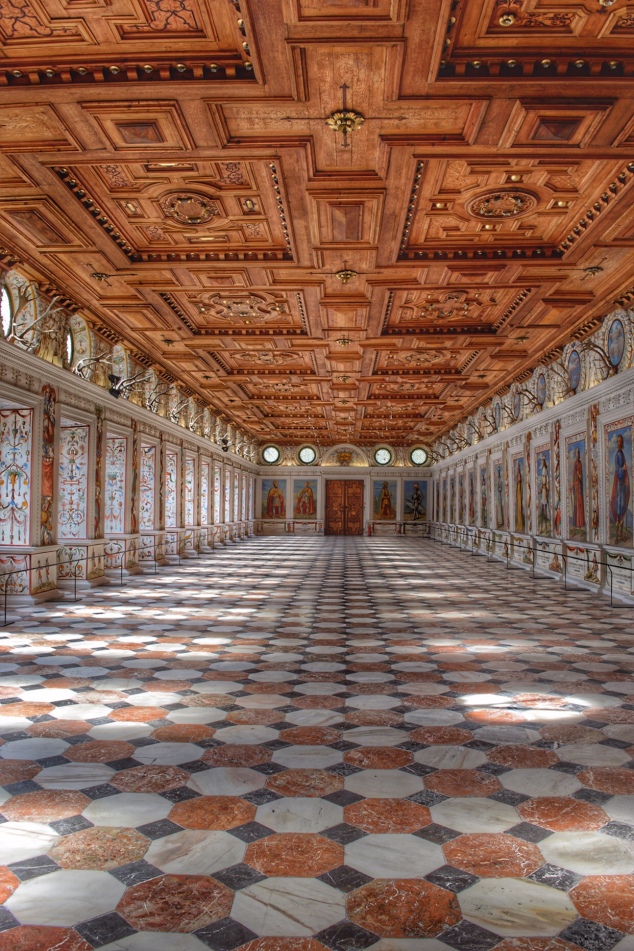 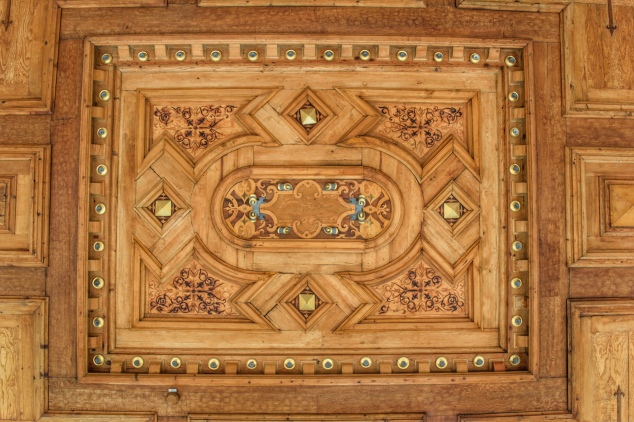 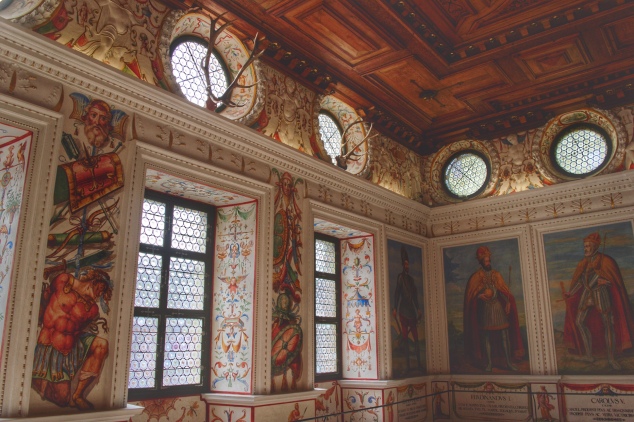 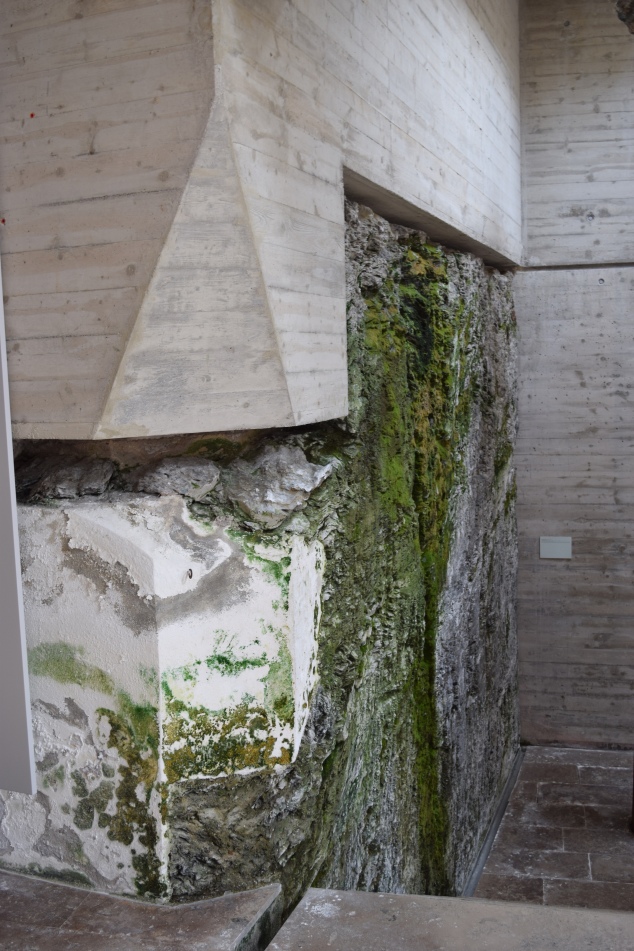 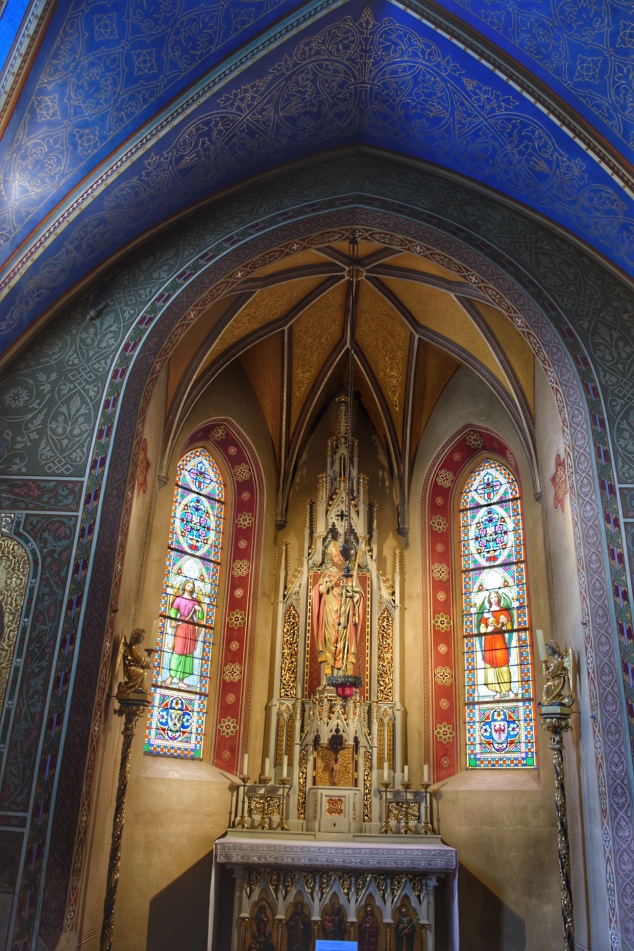 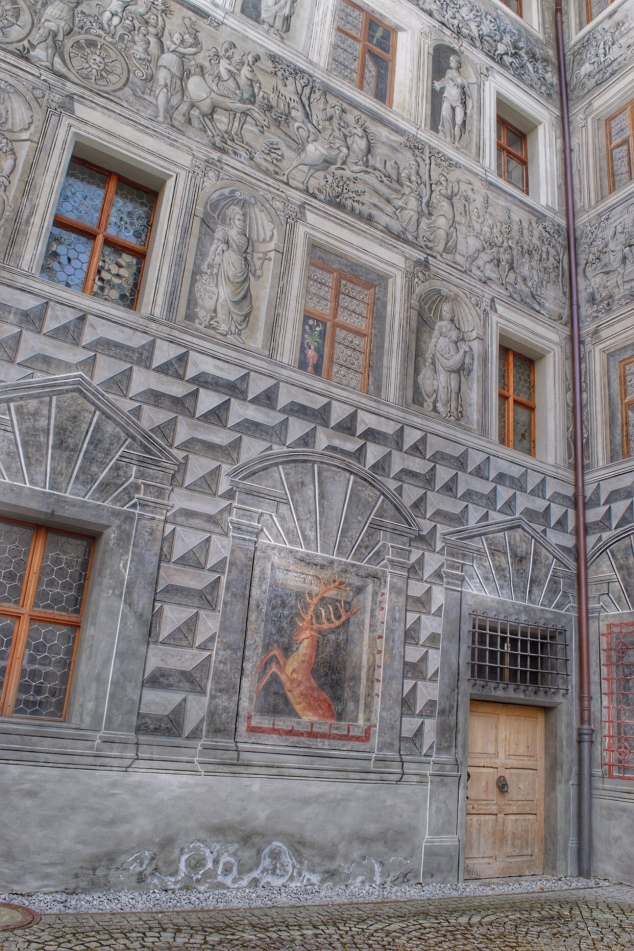 With only one night/day in Austria we made the most of it by visiting the Harley store (a must in each country), tooling around in Old Town to look at the Golden’s Dachl, Innsbruck’s most famous landmark — a golden roof! The Goldenes Dachl, or “little golden roof” is covered with 2,657 gilded tiles that glimmer in the sun. Emperor Maximilian I (1459-1519) ordered his royal box with its flashy roof so that he could watch jousting (something we learned a lot about at Ambras Castle). Finally we ended our day in search of a Starbucks to purchase me a “you are here” mug. Unfortunately, Innsbruck didn’t have a Starbucks, but Marty found one in Salzburg an hour away so we headed onward. 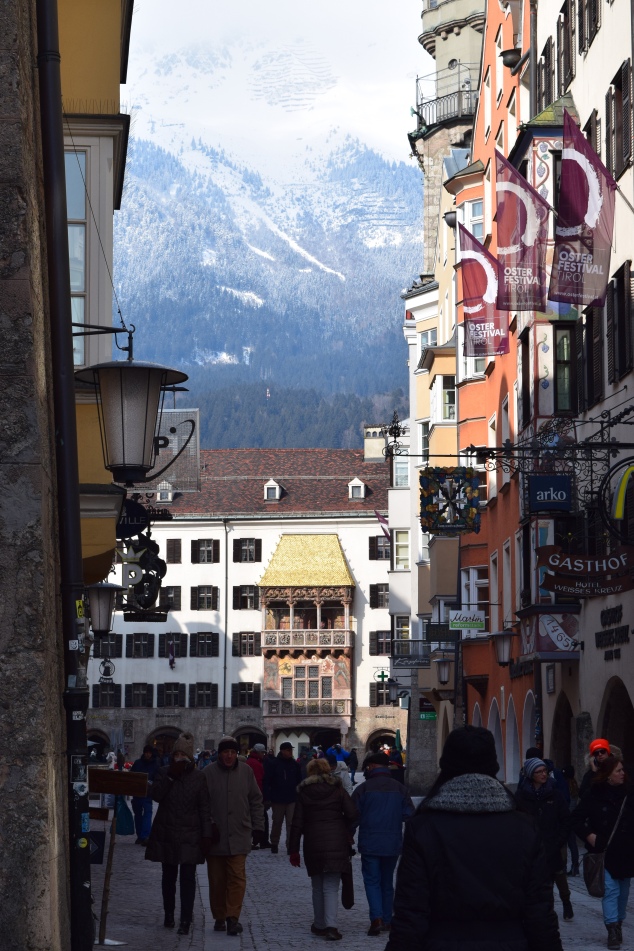 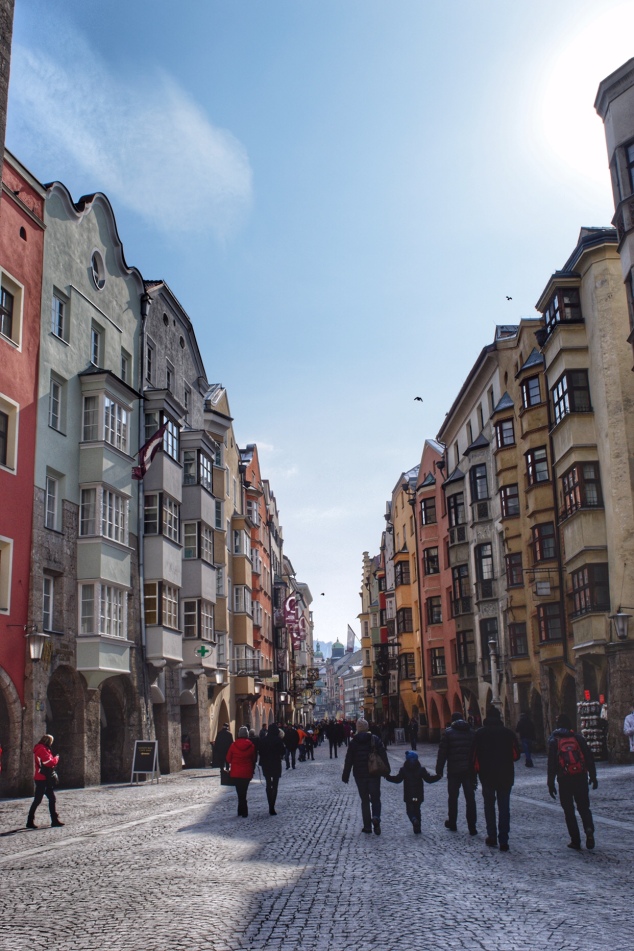 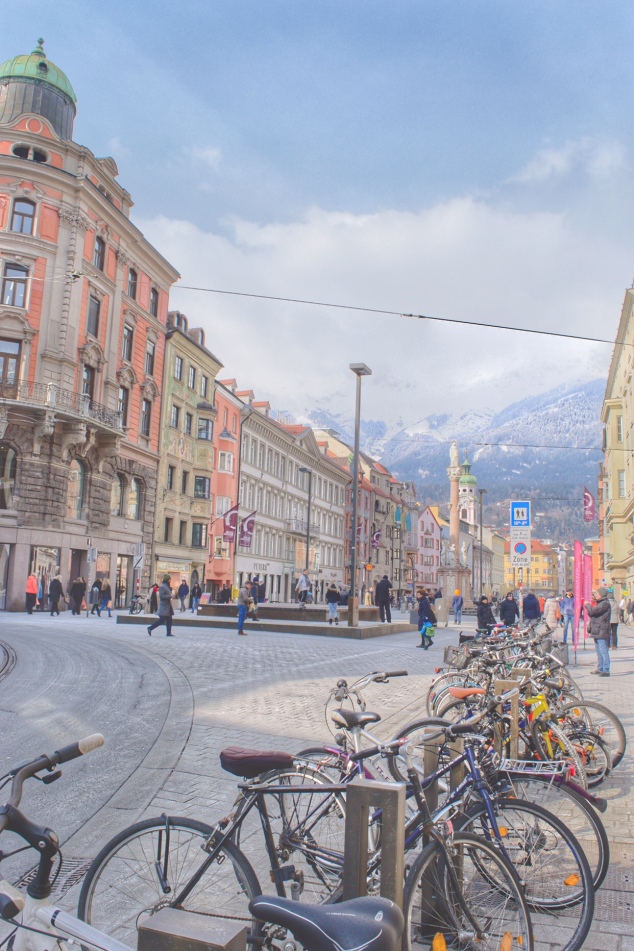 The amusing part… or not so amusing part of driving in most of Europe are the small towns you have to drive through, roundabouts and tiny roads that are two-way but look more like one-way. Now, don’t think for one second that the drive isn’t gorgeous, but it’s a bit tense at moments when it looks like you’re about to barely squeeze by the car in the other lane. Thank God Marty was driving!! After driving for about an hour, we followed GPS into a large parking deck and proceeded to look for Starbucks. We had actually arrived at a large, multi level shopping mall. It had a cool green-space on the ground floor, lots of cafe’s to grab a caffeine fix at and clean, comfortable seating areas throughout. After making a few rounds we finally found our Starbucks and picked up my coffee mug! Marty’s so good to me…

After a full day in Austria we were headed back into Germany… it was our first late-late night for arrival and it irked our host, but we made amends and after arriving close to 1am we finally tucked in for a few nights. (It was a private flat so we didn’t realize the host had to meet us personally to give us the entry fob and key… whoops!! (I wouldn’t make that mistake again). 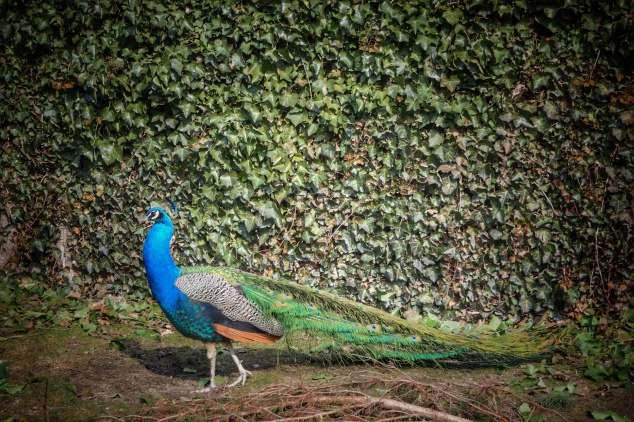